to the building industry

Unisphere
The Unisphere is a spherical stainless steel representation of the Earth, located in Flushing Meadows–Corona Park in the borough of Queens, New York City. The sphere, which measures 140 feet (43 m) high and 120 feet (37 m) in diameter, was commissioned as part of the 1964 New York World’s Fair. The Unisphere is one of the borough’s most iconic and enduring symbols. 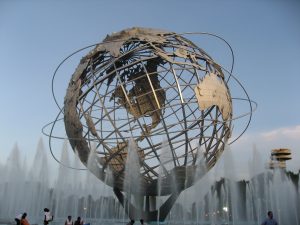 “Queens World Fair Unisphere” by Ian Irving is licensed under CC BY 2.0

Gateway Arch
The Gateway Arch is a 630-foot (192 m) monument in St. Louis, Missouri, United States. Clad in stainless steel and built in the form of a weighted catenary arch, it is the world’s tallest arch, the tallest man-made monument in the Western Hemisphere, and Missouri’s tallest accessible building. Built as a monument to the westward expansion of the United States, and officially dedicated to “the American people,” it is the centerpiece of the Gateway Arch National Park and has become an internationally recognized symbol of St. Louis, as well as a popular tourist destination. 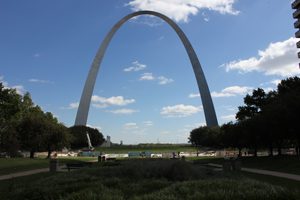 “Gateway Arch, St. Louis, MO” by Nicolas Henderson is licensed under CC BY 2.0 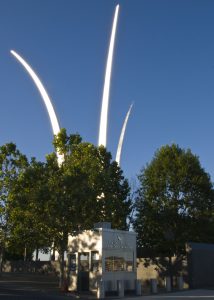 “The United States Air Force (USAF) Memorial Arlington (VA) May 2015” by Ron Cogswell is licensed under CC BY 2.0

The Atomium
The Atomium is a landmark building in Brussels, originally constructed for the 1958 Brussels World’s Fair (Expo 58). It is located on the Heysel Plateau, where the exhibition took place. It is now a museum. Designed by the engineer André Waterkeyn and architects André and Jean Polak, it stands 102 m (335 ft) tall. Its nine 18 m (60 ft) diameter stainless steel clad spheres are connected, so that the whole forms the shape of a unit cell of an iron crystal magnified 165 billion times. Tubes of 3 m (10 ft) diameter connect the spheres along the 12 edges of the cube and all eight vertices to the center. They enclose stairs, escalators and a lift (in the central, vertical tube) to allow access to the five habitable spheres, which contain exhibit halls and other public spaces. The top sphere includes a restaurant which has a panoramic view of Brussels.

“The Atomium” by O Palsson is licensed under CC BY 2.0

Cloud Gate
Cloud Gate is a public sculpture by Indian-born British artist Sir Anish Kapoor, that is the centerpiece of AT&T Plaza at Millennium Park in the Loop community area of Chicago, Illinois. The sculpture and AT&T Plaza are located on top of Park Grill, between the Chase Promenade and McCormick Tribune Plaza & Ice Rink. Constructed between 2004 and 2006, the sculpture is nicknamed The Bean because of its shape. Made up of 168 stainless steel plates welded together, its highly polished exterior has no visible seams. It measures 33 by 66 by 42 feet (10 by 20 by 13 m), and weighs 110 short tons (100 t; 98 long tons). 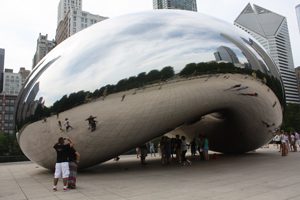 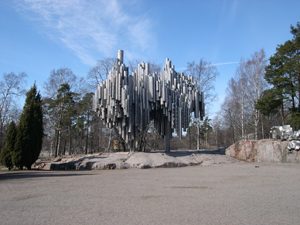 “Sibelius Monument, Helsinki” by jelm6 is licensed under CC BY 2.0

The Kelpies
The Kelpies are 30-metre-high horse-head sculptures featuring kelpies, standing next to a new extension to the Forth and Clyde Canal, and near River Carron, in The Helix, a new parkland project built to connect 16 communities in the Falkirk Council Area, Scotland. The sculptures were designed by sculptor Andy Scott and were completed in October 2013. The sculptures form a gateway at the eastern entrance to the Forth and Clyde canal, and the new canal extension built as part of The Helix land transformation project. The Kelpies are a monument to horse powered heritage across Scotland. 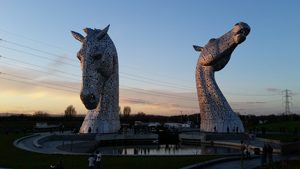 “The Kelpies” by amateur photography by michel is licensed under CC BY 2.0

The Steel Man
The Steel Man will be a 32 metre high sculpture and Interpretation Hub located in Rotherham (J34,M1), forming a landmark gateway to Yorkshire and the Sheffield City Region. The project began with a simple idea to create a landmark artwork and visitor centre that would act as a beacon for the Yorkshire region and a catalyst for change: The 32 metre high stainless steel sculpture and Hub will be built in Rotherham, a town steeped in the history of steel production for generations. The Steel Man will honour the people and places that forged this heritage of Steel and it will highlight the new technologies and specialised manufacturing that is helping to generate the northern powerhouse. Schools, Universities and other educational facilities have embraced the project which will stand as a totemic symbol of British manufacturing and innovation. 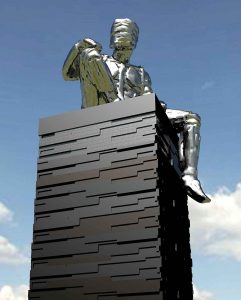 “The Steel Man” by Sheffieldicon is licensed under CC BY-SA 2.0

Top
We use cookies on our website to give you the most relevant experience by remembering your preferences and repeat visits. By clicking “Accept”, you consent to the use of ALL the cookies.
Cookie settingsACCEPT
Manage consent

This website uses cookies to improve your experience while you navigate through the website. Out of these, the cookies that are categorized as necessary are stored on your browser as they are essential for the working of basic functionalities of the website. We also use third-party cookies that help us analyze and understand how you use this website. These cookies will be stored in your browser only with your consent. You also have the option to opt-out of these cookies. But opting out of some of these cookies may affect your browsing experience.
Necessary Always Enabled

Performance cookies are used to understand and analyze the key performance indexes of the website which helps in delivering a better user experience for the visitors.

Analytical cookies are used to understand how visitors interact with the website. These cookies help provide information on metrics the number of visitors, bounce rate, traffic source, etc.

Advertisement cookies are used to provide visitors with relevant ads and marketing campaigns. These cookies track visitors across websites and collect information to provide customized ads.

Other uncategorized cookies are those that are being analyzed and have not been classified into a category as yet.